I rode a good loop in the area recently.  Of course it was in epic conditions...

The Big Sinking/Little Sinking area (which includes Bald Rock Fork and all of PMRP) is a great place to explore and ride gravel county roads, dirt and gravel oil roads, and long forgotten logging and oil roads.

I pieced together a nearly 16 mile loop utilizing a four-ish mile paved section of the Sheltowee Trace, some dirt doubletrack, and gravel county roads.  Of course when I rode them there was 6-10 inches of snow on 2/3 of the route.

If you begin at the Flat Hollow Trailhead (in better conditions) you'll have to ride 1.3 miles west on Bald Rock Road to get to the loop I show in the map below.  This is indicated by the yellow star (Flat Hollow TH) and the short section of Bald Rock (blue line).

Once you gain Fixer Road you travel north until you reach Lairson Road on the left (I can't remember if it's signed "Lairson" or "Fixer-Leeco" but shows up as Lairson on Google Maps).  Take Lairson until you reach a lake from below its dam.  At this point you can either take Fixer-Leeco to the left for a more adventurous option or go right continuing on Lairson for a still scenic options but slightly less wet and difficult.  Once you gain KY 1036 on the ridge head left to Standing Rock where you pick up the Sheltowee Trace (paved, comes in from the right on Big Bend Road) and pass the Sun Oil Shop which is the trailhead for the Hollerwood (offroad) Park.  Sun Oil is a good alternate trailhead and it's where I began my recent ride.

Continue on 1036 until it drops into the valley, then turns to gravel, and then begins to climb.  At a hard right turn take the dirt road left (stay on Sheltowee and leave county maintained road) which is Little Sinking.

You leave the Sheltowee at the first left possible after the initial techy climb.  The Sheltowee continues south up a stout grave climb.  As a sidebar, if you continue up the Sheltowee (New Virginia Road) you will reach KY 52.  You can go left for Bear Track Grocery or right to get to Lago Linda (camping and amenities).

Make the left off of the Sheltowee and follow a nice doubletrack dirt road for about two and a half miles until you cross Big Sinking again.  After crossing Big Sinking follow it upstream until you meet Fixer Road at Bald Rock.  This is where you entered the loop if you approached from Flat Hollow.  Turn right and cross the creek again and retrace your ride to Flat Hollow.

From Flat Hollow this is nearly a 20 mile ride and that's without sampling any of the trails we have built or are working on!  This'll give you a nice backcountry experience despite a few houses along the way.  In the off season you won't see many people.  You may encounter some off-roaders in nicer weather. 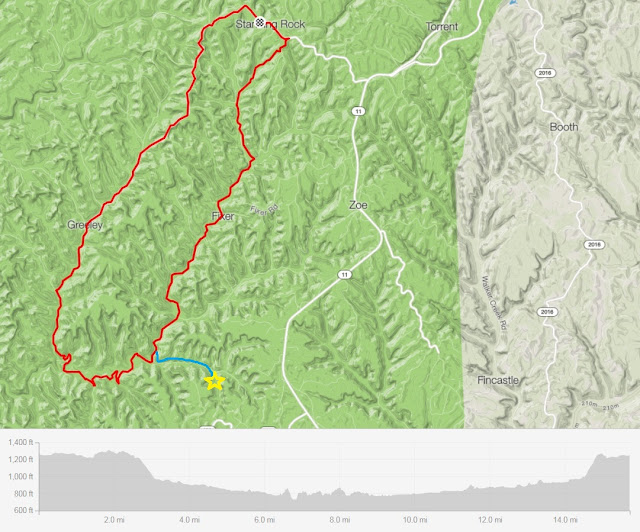 Posted by Chainring at 5:29 AM